It has been interesting, to say the least! I’m so tired. After the week of the adoption roller coaster I didn’t feel completely ready for Christmas and didn’t get everything done that I wanted. The show must go on though! It all came together in the end 🙂

Christmas eve we celebrated with my side of the family. It is tradition with us that we have fruit crepes with whip cream for Christmas morning breakfast. Since we were celebrating in the evening I did them for anyone who could be there by 3pm. We did Livi and Maggy’s presents around 5, hoping that Vanessa’s husband would be able to join us for adult gifts after supper. I love seeing Livi and Maggy so excited! They have such wonder for everything. It is so precious. As usual, Livi got spoiled by her Marmee and Aunties. I think her favorite gifts were her baby doll and stroller from Auntie Sessa, her purse where she is now keeping all her jewelry from Auntie Liz, and the tea set from her Marmee! I have already enjoyed many delicious cups of make-believe tea 🙂

Loving her tea set.
Apparently I carried a tea set around with me when I was a kid.

We went to my mom’s church’s Christmas eve service. The most perfect part of that experience was when Livi was feeling left out from not being able to be on stage with the other kids and not knowing any of the songs they were singing, during a silent, somber part of the service she yelled out at the top of her lungs “LET’S SING POKER FACE!” People on the other side of the auditorium heard her. It was hilarious! I laughed so hard I was crying!

We went home and put our exhausted child to bed then went upstairs for our Turkey dinner! Delicious as usual! We were still holding out hope that Josh, Vanessa’s RCMP husband would get there but apparently he was in the middle of an arrest and couldn’t get away early as he was hoping. Lame! The life of a cops family though 😦 So, we opened the adult presents with out him and since we couldn’t get a hold of Sean on skype from China, he wasn’t there either. For the first time in three Christmases my sister Liz was there though! It felt really nice to finally have her for a Christmas with Livi. I’m so thankful that we are all starting to heal. It felt right to have her there again 🙂 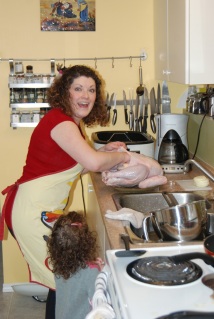 Vanessa made the Martha Stewart-esque Turkey!

After a long evening we finally went to bed only to be woken up by Livi having her first official asthma attack! Jon’s never seen an asthma attack so he was pretty nervous. Livi was scared too. She kept wheezing and crying which scared her more and made her wheeze more. Thankfully, we had some asthma puffers on hand, even though we’ve never used them. The aero-chamber just made Livi more upset though… and she then threw up. Poor baby! Even through her screams we did get some of the medicine in her and she started breathing better and settled down. It was a rough night though. I think Jon and I were on edge that she’d have another attack and Livi was over tired and feeling crumby herself so we were all up about four or five more times. Christmas day night wasn’t any better. She had a few asthma episodes that night. I lost count of how many times we were up. We tried to have her sleep in our bed, we took turns sleeping with her. Livi was more aware that crying made her breathing worse though and tried to calm herself and called us before she got too scared.

Christmas Day was very busy, all the more on no sleep! Jon and I had exchanged presents the night before (I got a pair of designer jeans that I love but could never bring myself to buy and Jon got a DVD series of the old BBC Sherlock Holmes that he had mentioned he wanted.) We just watched Livi open her gifts; a dump truck and bull dozer/digger (we got two so the girls could take them outside in the summer and each have one), and the “prized” gift of a microphone! It has a disco ball on the stand with buttons for applause and drums! She has carried it anywhere we will let her since. 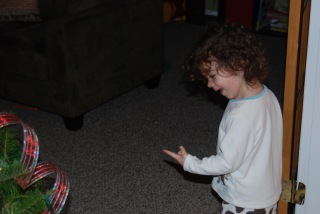 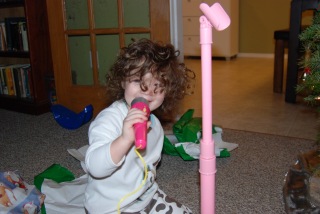 Playing with the microphone

As soon as we could get ready, we hit the road! Our first stop was the Abbotsford Hospital to welcome baby Iris! Our friends the BK’s had a baby sister for Jude! Livi was so cute and concerned for the baby. I can’t wait to see her as a big sister! It was so fun seeing little Iris. She looks so much like Jude did as a new born… only a little plumper. It brought back so many great memories too and even Jon said it made him want to have another birth child! 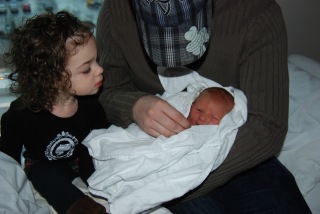 We then went on to celebrate Christmas with Jon’s family. We opened presents in the morning. Livi got a ton of various art supplies which she is really excited to use… although she may not know it yet 🙂  We tried to put Livi down for a nap, but I guess her stomach was a little upset from the change in routine and all the extra food she’s been eating. She had a pretty amazing diaper surprise for me after only an hour of sleeping. She wouldn’t go back to sleep, so we played and visited for a little while until I took her back upstairs to try for another nap. I slept with her this time and we both got an hour of rest in. We both REALLY needed it. We had yet another delicious meal and made it home before it got too late. 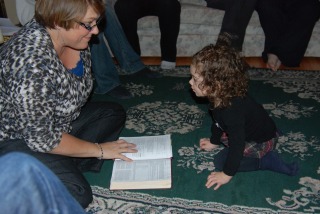 Livi was trying to help with the family tradition of
reading the Christmas Story before presents.

Opening a Christmas magnet for her knew magnetic art board!

On Boxing day, we had one more family gathering. My Mom’s side of the family got together for food and fun! Livi was so tired by this point and had big bags under her eyes, so we just stayed for over two hours. It was good that we did go though because my Grandpa, Livi’s Opa, was able to come and was in really good spirits. It was nice to see! His health has been really deteriorating and very unpredictable.

Christmas is over and we are thinking of taking down the tree as soon as possible because of Livi’s asthma attacks. We are thinking that maybe that will help. We are very tired and hoping Livi sleeps better tonight! It was a great weekend though and we can’t wait for next year when we’ll have two little ones to enjoy!