Livi is doing well… sometimes a little too well for her own good! She is such a character these days and knows just how to make us laugh even when we are trying to be serious. It is not good for our parenting skills! For example: We told her to lay down in bed… so she lay down, on top of her blankets, upside down, tummy down. We told her to turn around… so she flipped on to her back. This repeated through her turning sideways on the bed too. Then it was time for kisses… so she stuck her tongue out for us to kiss! When we told her to put her tongue in back in she pulled it all back in but the tip and curled it! I lost it then and couldn’t keep a straight face. She wasn’t being a complete brat. She was giggling the entire time… and by the end she had me and Jon rolling over too!

On our only snow day I took Livi out on a “poor man’s sled” (a storage lid and an old belt!)
So much fun!

For the past four months we’ve had Livi in gymnastics and it is pretty much the best thing ever for her! She LOVES it! She has become less clumsy… because lets face it, her fine motor skills where not her strongest point. When Jon was off for Christmas break he got to come and see her in all her glory! She was quite excited to show off her moves to Daddy… 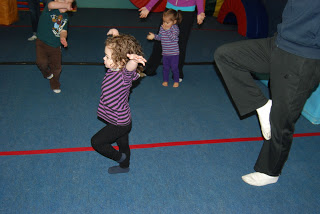 Showing off her balancing skills.

On the balance beam all by herself!

Somersault over the bar!

When the Spring Leisure Guide came out and I found a dance studio that offered ballet classes to 2 year olds! I asked Livi if she would like to go and she literally started doing flips! The day before the class, Livi told every person who looked at her in the grocery store that she was going to ballet. That night she didn’t sleep until 10:30pm! She was way to excited! It was quite cute actually. When she finally got to her first class I think she was a little over stimulated with the expectation. She did really good though! It was perfectly adorable.

They were being butterflies! 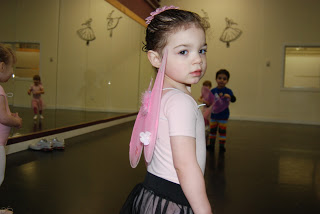 She looks much to old in this picture. 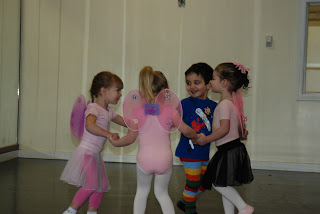 Ring around the Rosie 🙂

Jon is of course very busy at work. A little too busy for my liking some times… but he loves his job. I think there is still some balancing that we need to work out between work and family time but things are falling in to place. He has quite a high stress job and with all the extra cut backs that he has to implement this year (government has to pay for the Olympics some how!) he has been stretched quite thin. 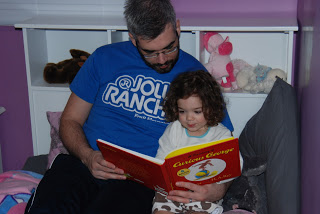 He still makes time to read Livi a bed time story almost every night he is home.

Because of the cut backs, I am now officially un-employed. I was working for Communitas in a group home. I only worked one day a week or so. We were not depending on the money but it did get banked in to our adoption fund. It was more a way for me to get out of the house. Now it is a joke around the house that Jon got me fired 🙂 It is a weird feeling to officially be a stay-at-home mom, not on maternity leave, just at home. That is now my job. It has changed my outlook on what I do with my day, which is a good thing. The house is cleaner and I’ve been putting more effort in to meal planning… which I have never been good at. I knew this was coming, it was not a surprise or unwanted, it is just a weird feeling to officially be a stay-at-home mom. Don’t get me wrong, it is one of the best jobs on earth… I just never thought it would be me.

I don’t think it is much of a secret that I am a planner. I think about things exhaustively and make decisions well in advance. I take comfort in having things organized and planned out well. I generally have a back-up plan or two as well, in case things don’t go according to my original plan. I consider it a positive trait… mostly 🙂 I get things done, am always prepared, and am generally pretty efficient because of the planning. It becomes a bit of a detriment when I am agonizing over something I have no control over or is still very uncertain. Take this case in point…

We have no idea how much longer it will take to bring Sofie home. We have been told anywhere from 3-6 months. Jon and I decided to get a second car when Sofie is home so that I can take her to different doctor appointments and therapies. The question is what kind of car? Basically we are wanting to get either a compact SUV or a mini-van. A compact SUV would be totally adequate for our family of four. If everything goes wonderfully with the adoption, though, a third child may be in our near-ish future. We might as well save the energy and extra money and just get a mini-van. But what if we don’t have a third child? Then there is no need for a mini-van. This feels like a huge decision! I know that I’m getting a little ahead of myself and I’m a little crazy. Either way, we’ll make it work.

We are still waiting for video of Sofie. It is taking forever. The Bulgarian MOJ apparently takes a long time to grant permissions for things. I am dying to have her home. Pray that we get her home really, really soon! I feel so helpless.