Today was our “Gotchya!” Day! I was so excited. Sofie is ours! Completely ours! No more orphanage! No more rotating caregivers! No more crying with no one able to help! Just family and love! How awesome!

We got to the orphanage around 10:30 am and met Alex, our main contact from Anido, who was also going to be our translator for the day. We had a brief meeting with the Director again to go over some of the last details. It whirled by quickly. I didn’t really know what was going on. I just wanted to get my baby and get out of there. It wasn’t that it was a terrible place. The staff were all very kind, a little on the strict side, but gentle and caring. Of course I do believe that orphanages and institutions are systemically flawed, I also now believe that Sofie received the best care they knew how and were able to provide. I just wanted to be settled in a nice hotel with her and able to relax.

The Director gave us a diary of when Sofie accomplished different developmental milestones and it even has a trace of her hand in it at 1 year old. Navsco is going to translate it for us! Some of the pages have little flowers drawn in it by the staff too 🙂 I believe Sofie was really loved. We were also given a little book with 23 pictures in it of Sofie from when she was 2 months old to blowing out the candles on her 3rd birthday! The birthday one made me really happy. We were celebrating her that same day! I’ll scan them all in when we get home. We signed some papers saying we had received the child, we gave our suitcases of clothes, lotions, and candy, gave the presents for the staff and Director then we were off! A few staff members came to take a look at us but no one really stuck around. I did get one picture of the entrance with Sofie and a staff. I don’t think she was a regular caregiver though. Maybe she was a Doctor? 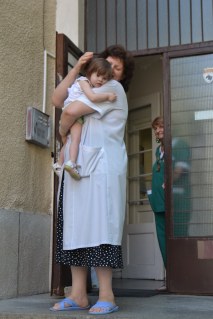 Saying goodbye.
We had a long car ride to Sofia. Alex was not nearly as aggressive a driver as the first one we had. Sofie fell asleep almost immediately and slept the entire way there. The car seat laws are not nearly as strict here as in Canada. We had her in a car seat that Anido provided but I doubt it would pass any Canadian tests. Alex said I could take her out if I wanted and I wouldn’t need a car seat for taxi rides with Sofie… I guess “when in Rome, do what the Romans do!” We are not planning to use a taxi very often, only to get to the mall once and the Zoo. Otherwise our hotel is central to everything.

Where are you taking me?
Up until now, Jon and I have been coping with some pretty sketchy hotels. The first one was nice but in a sketchy part of town, really far away from everything. The second one in Plovdiv, was right in the middle of the square where all the shopping and restaurants were but it was bad, like Ivanhoe in Vancouver bad. I was so uncomfortable and sick too. We needed to book our hotel for when we were back in Sofia with Sofie and did some looking around. In the end, location and luxury won out. I really just wanted to be comfortable so we sprung for the nicest hotel in the center of town. It has a walking park right outside and a playground. The room is insanely huge with couches and a front entry room! We got a really good deal on it from Expedia but every time we tell some one we are staying there, there eyes get all big. We were planning on $70-$80 a night while we were here but this is costing us just over $100. This room typically costs $325 a night. Thank you Expedia! The first hotel was right on budget but we saved a bundle with the second one, only paying $35 a night. We decided this was my birthday present 🙂 This room is so worth it. Sofie has room to explore with out getting in to too much. She can sleep in bed while I blog at the desk and Jon reads on the couch! Okay, enough justifying my extra expense 🙂 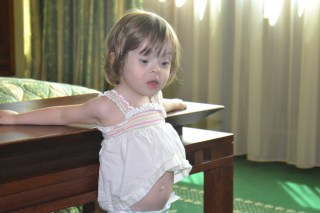 Checking out her new stomping grounds 🙂

Settling in with Daddy.

Play time!
We are already learning a lot about Sofie. She is so calm and quiet. She generally only cries when she eats. This is looking like it is going to be our biggest hurdle. She clenches, grinds and clicks her teeth and jaw continuously but doesn’t really chew food. I think she is really delayed orally. We have only heard her say “ahhhh’s” so far too. I don’t think they let her put things in her mouth to stimulate her oral development so we’ve been playing at it a little today… not with huge success. The only thing she has really let me get in there is my finger once or twice. She doesn’t like eating. They basically had to force feed her at the orphanage, from what we could see, and she cried on and off through out it. I don’t like this approach but she is so skinny, I know she needs to eat. We brought some formula with us but she won’t take the bottle yet, and drinking anything from a cup is hit or miss for her. We are going to try and find a suitable sippy cup. She can’t use a straw yet either… we tried. I think the plan of action, until we can talk to some professionals back home, is to try give her 5 smaller meals instead of the three she is used to so she can continually have something in her stomach. Any advice with this is appreciated! I never had this problem with Livi!
We gave Sofie her first bath today. I didn’t see any tubs at the orphanage, only shower rooms with buckets. She didn’t love it, but she didn’t hate it. I went in with her and I think that is why she didn’t completely hate it. We got lots of skin to skin contact which I don’t think she’s ever had before either. Staff always had their uniforms. She clung to me but let me wash her and even smiled once or twice. She didn’t venture away from me at all though. She has a bad bum rash which we were told was from the antibiotics she was given when she was sick last week. I can’t really get a good look at it because the cream they were using has turned her skin all purple. I think it is the same as thrush medicine. I thought thrush was a yeast infection that babies could get on their mouths. I’ve also heard of babies getting yeast infections on their vagina’s but not their bums. I’m thinking it is more likely that with her diarrhea her bum was irritated from the bm’s and wiping. They wanted to send me home with some but I assured them I had some cream. I’m going to trust Arbonne in this case more than purple dye. We gave her lots of naked bum time after her bath too, another thing I don’t think she’s ever had. She kept trying to touch her bum 🙂

After settling in to our hotel room a bath and dinner, we started doing the round of Skype with everyone! Everyone was very excited to see her 🙂 Livi kept looking at her and trying to talk to her. It was really cute. I asked Livi if she thought was should bring Sofie home and she matter-of-factly said “yup.” I’m so looking forward to settling in at home with my two baby girls 🙂

Wearing Sofie out and about! Everyone kept staring at us.
Baby wearing is not in fashion here 🙂

Sofie was so tired by the end of everything, but despite it all she wouldn’t fall asleep in our bed. We got a king bed so we could co-sleep while we were here. She was tired, still, and kept yawning, but 40 minutes in to Jon and I each taking turns lying down with her she was still awake. I decided to try and put her in my sling again, since she has been enjoying it so much. 10 minutes of me swaying her in my sling, she was out. I loved that. I’m not sure I want this to be a continual thing for the next year or anything, but I’m totally willing to do that each night for a few months 🙂 Just look at the results…