Helping Daddy with the recycling.
This adoption is truly a dream come true, but it has brought with it a lot of challenges. Most of the challenges were considered and expected before hand, but it still doesn’t make it easy! Jon and I had talked excessively about the possibility of Sofie having certain behavioral issues but we had hoped we’d slide by with out Livi having too many issues. For the most part Livi is doing really well but she is having some jealousy and regression. She usually wants the parent who is taking care of Sofie at the moment. She has been very defiant, overly emotional and tells us she is going to do things that are not allowed. She has showed her regression too. I don’t quite understand it and am finding it so frustrating. She has been potty trained for well over a year and in the past two days she has peed her pants 3 times and partially pooped in her pants twice.
I know Livi is in transition and her whole world has been interrupted and turned around. We didn’t bring home a tiny baby who just sits there, sleeps, and eats. We brought home a walking three year old who engages with us, seeks out our attention and has her own little personality. It seems to be very different from my friends experiences. Easier in some ways but harder in others.

Bed time at night is the worst. Each night Livi is ridiculous. She won’t lay down, bangs the wall, lays down the other way, wakes up Sofie so she gets out of bed and get us to come back in the room, and has a million excuses to gets out of bed. It is so beyond frustrating. Bedtime, which used to be a 15 minute routine is now up to an hour and a half. It is so ridiculous.

Tired out from the sun 🙂

Sofie is doing so much better than we could have hoped for. She is still indiscriminate with who she approaches and plays with but she is coming to us for food and comfort. I don’t think I’ve seen her go to any one else for that recently. Her eating has improved more than I could imagine. She rarely cries during meals now and she has a pretty good appetite! She is still VERY picky about what she eats and prefers sweet things. What kid doesn’t, right? She eats 8 month old baby food. The 12 month stuff has chunks which she won’t eat. She still hasn’t drank much. We tend to get a few sips of chocolate milk, and sometimes milk, in to her each day. Yesterday her Gramma got some juice and water in!!! This is the first time she has drank water since being at the orphanage! Yay Gramma!!!

Sofie  is very quiet but she is definitely discovering her voice. She has started letting people really know when she is mad… usually because we are taking her out of the bathroom. She is starting to say mama more but I’m still not sure she is associating it with us. She is cuddling with us as she goes to sleep, instead of doing her orphan rocking thing that I hate! I love cuddles with my kids and I love that Sofie is choosing to cuddle with us! She is playing with toys too, which is so awesome. She stacks rings, loves playing with necklaces and tea sets. I think she might end up being really girly. She doesn’t like barrettes in her hair yet though. She just started kissing us today though! I love it! They are so cute and usually have a little tongue in there but I think that is fairly normal for her developmental level. She can wave goodbye and blow kisses to. That came from the orphanage.

Sofie still grinds her teeth and clicks her jaw but she doesn’t do nearly as much as she did in the beginning! The grinding teeth is also a symptom of low muscle tone and control in her jaw, not just a coping mechanism of the orphanage. She rocks way less… I will sometime go all day with out seeing her do it. She must be feeling so much safer and dependent on us to help her cope. She doesn’t need that extra coping mechanism! Hooray!

Nap times still suck though. Today, she took nearly two hours to get to sleep at nap time today. But she did finally sleep! The parents of child with DS need to more stubborn than the child! She doesn’t generally cry like she used to when going to sleep. She just takes for ever to settle. Surprisingly she goes to sleep much smoother at night. Livi has the issues at night. Sofie’s sleep is very unsettled. She is a pretty heavy sleeper but very unsettled. She tosses and turns like you couldn’t even imagine. Most days she is ending up on the floor. She usually falls off feet first and doesn’t hurt herself, but sometimes it is head first… I think we should probably set up the crib. I feel kind of bad for Sofie because in the orphanage she wasn’t allowed to explore her world and never got hurt. In the first few weeks she has been with us she’s gotten a few bumps on the head, a scraped knee, and a few good scratches on her arm! I think it is good for her though 🙂

We took her to see a fabulous pediatrician who looked her over and is making some referrals for us. The appointment will cost us over $200 because we don’t have Sofie’s citizenship card yet and can’t get her Care Card with out it! I hope it comes fast. The pediatrician said she does have a murmur in her heart that we’ll check out and wants to get a baseline for a bunch of things but over all she is doing well. Of course she is under weight and he thought what we were doing was fine. Basically get anything we can in to her, no matter what it is. She is 20lbs. That is in the 5th percentile of the DS growth chart and up half a pound since we got her, assuming the scales were both accurate. If I remember right she is 32 inches tall, which puts her under the 25th percentile for height. We also met with the Child Development Center this week. Sofie will get Physiotherapy, Occupational therapy and Speech Therapy! Yay! The CDC was really great too! Sofie is definitely getting a good start!

Riding on Daddy! Way to much fun! 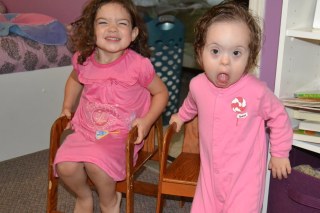 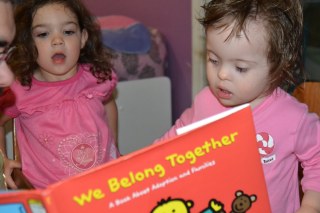 As far as parenting, I think I’m really starting to feel attached and like Sofie’s mom. I love her completely, although it is still easier to love her in her easy, happy times. I think that is true with any child though 🙂 It seems to be growing more slowly than with Livi though. I don’t quite remember how things progressed with Livi. I remember not feeling it right away like Jon but I don’t know exactly when I was fully attached. With Sofie, I think I’m so much more aware of the process and analyzing all my feelings. Not sure if that is a good thing or a bad thing.

With Livi, I was the main caregiver, I was her food and usually her comfort. I spent 24/7 with her. I didn’t have the freedom to go out for more than an hour with out her. I felt like I was the only one who knew what she wanted and needed and when. With Sofie, Jon is home full time until December (yay for government jobs and topping up EI!). I’m not the only one who can feed and comfort Sofie. He is very much in the exact same role as me here. I love this experience, but it is so different. I feel like I should feel guilty if I leave Sofie at home and take Livi grocery shopping, but I don’t. I enjoy grocery shopping sometimes and am loving the one on one time with my first daughter. Is this normal? I think it probably is.