Livi has been taking off lately! We are just amazed by how fast she is accomplishing different things. The most amazing feat has been her writing. She began with Daddy’s Valentine’s card. I put dots for her to trace, helped her hold the pen properly and held her wrist steady. She did really well. I was quite proud… 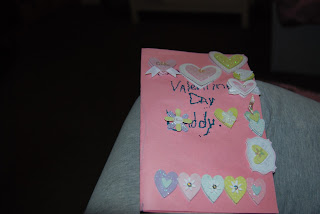 A week and a half later she wrote a birthday card for her Daddy. I again made the dots, but only outlined the letter with my finger before she did it all by herself! I was SERIOUSLY proud!… 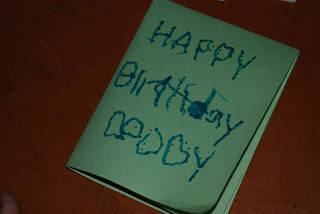 This is what she has been doing lately! She tells me the words she wants me to write and just goes at it 🙂 It is her “work” while I am doing my work on the computer. I love it!… 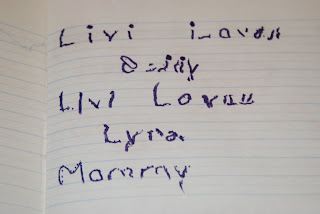 It is not new information that Livi is talkative. She speaks clearly and pointedly about everything. It has its pros and cons! Lately though, she has been coming up with some pretty hilarious sayings…
-After stubbing her toe, and walking over to me, she cried “I CAN’T WALK!”
-She fell down and scraped her knee, crying she said “A prune will help me!” She loves prunes and thinks they are basically candy.
-“Excuse me! I farted!”… a few seconds later “Oh! I farted again! Mommy I fart A LOT!”
-Me: “Livi you are getting so big!”
Livi: “I know! I’m growing up big… Just like Mommy!”
-“What’s a penis for?” … She asked this to her Daddy and he epically failed in his response! I think he was caught off guard 🙂 He started laughing!… Then told her that that was adult talk but did manage to explain it was for peeing. Not convinced that was the most holistic response he could have given :S
Okay, I just typed those out and realized how dramatic she sounds. She is dramatic… and quite the little performer. She puts on dance shows for me daily and frequently sings too. I wouldn’t be surprised if she ends up being a comedian either because she is always joking and pretending with us. She also has a bit of a quirky sense of humor. She makes funny faces at us, even though she knows the answer to something she’ll say the wrong thing and double over laughing, and she’ll do funny walks and moves just to make us laugh. Such a goof-ball!

She also has the makings of an imaginary friend. She calls it ‘Giant’. I love it! Jon is a little unsure of it’s appearance but I think it is a good sign of a creative imagination! I think Giant was born from the furnace room which opens in to our hallway. The furnace makes a noise when it comes on and startles Livi and somehow that became a Giant in the hallway. I didn’t want her to be afraid of anything so I encouraged her to talk to the Giant and invite it to play with her…. Now they run around the house together, jump on the bed together, she tries to give him her food and I get her to eat things she is unsure of by saying something like “Eat you dinner quick before Giant gets it!”

She is too smart for her own good and rapidly learning how to do everything herself. She can mostly undress herself. She still needs some help with her tops and boots, but shoes are no problem. Once I help her with want foot goes in what hole she can pull her pants up. She goes pee and washes her hands all by herself when we are at home, but I do occasionally find the entire roll of toilet paper unrolled on the floor because she forgets to wipe and instead has fun spinning it. She is a pro and making coffee with Daddy and only serves us coffee from her tea set. She has also become quite tech-savvy. Her fluent ability to use my iPhone, navigate between her games and even buy food for her virtual giraffe once (I was not too happy about that one!) spurred my mom in to buying an iPhone to keep up with the technology! She can also change DVD’s in the Xbox! Jon is super impressed with his little tech gamer… Me? Not so much. 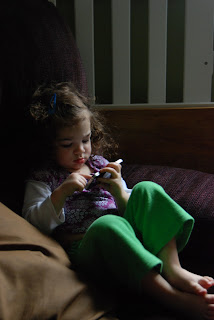 Playing her puzzle app on “her” phone.

Right now Livi is very congested. I think the last time she had a cold that lasted more than 36 hours she was about 6 months old. She never gets sick so I’m not really sure what to do other than keep the steamer on. She missed her nap today because she couldn’t breath through her nose to suck on her soother and actually sleep. She finally did get a late nap but then didn’t fall asleep until almost 10! I think we are in for a long night.