August 2, 2011February 20, 2015
I some how left my baby. Like I said, it was the hardest thing I have ever done. I held it together for most of the trip to the airport. I only quietly cried once in the car. As we were walking to the security check though I could feel the tears coming. I just started bawling. I had hoped I would be able to keep Livi from seeing me cry but that plan was an epic failure. I was able to talk to her with out heaving though! I kissed her and hugged her, told her how much fun she was going to have, told her how safe she was and that Mommy and Daddy would be back in two weeks! I tried to sound excited but she was confused with all the tears. Even Jon got choked up. He “says” he didn’t shed a tear though. My sister’s helped save the experience for her though. They got really excited for her and had her waving and shouting how much she loved us through security. It made me cry more but I could hear that she was having fun.
We got through security extremely quick so we grabbed some comfort food/alcohol at Milestones to cope! We actually did need to eat dinner. Our plane was on time and we started boarding around 8:15pm. I’ve never been on such a big plane and have never actually seen a first class with my own eyes. It was a weird feeling being herded through the luxury seating like second class citizens. It reminded me of Titanic for some reason…
The flight itself was fine. I actually managed to get about 2-3 hours of sleep. I’m not sure what quality that sleep was and it only came with the help of a Gravol pill and two ibuprofens for my cankle pains. My feet ended up swelling a bit, despite my best efforts to move around and stay hydrated… I have a sneaking suspicion the salt infused plane food was what pushed them over the edge. We had a little turbulence over the ocean but nothing that deployed the air masks. I was so uncomfortable through most of it. The staff were not the friendliest people in the world either. I suspected they were on their last flight of their stint and crabby from their long shifts. In fact, most of the English people we ran in to today were not overly pleasant. One bus driver we had yelled at the entire bus for someone accidentally holding the call button down… We actually think it was Jon but we didn’t want to call attention to that fact after that.
We had decided to skip any excursion into London because we were both so tired, we weren’t sure if we had enough time to go in to the heart of London and we hadn’t researched it very well because it wasn’t one of my priorities for this trip. But, as we were walking through the dreary halls of Heathrow Airport I happened to ask an attendant where we could spend our 9 hour layover. She encouraged us to “jot down to Windsor castle”. She was actually quite helpful and does not fit in the same category of the English people I was talking about earlier. She gave us specific instructions for which bus to take and assured us Windsor Castle was quite close to Heathrow. We decided to go for it. I mean, when are we ever going to be in London again?!

The bus took about 30 min to get to Windsor and was quite a pretty drive. I couldn’t get enough of all the brick houses, town homes and bridges. It was like I was in a movie… Well, I’ve only seen them in the movies 🙂 Unfortunately, when we got to the castle it had just closed. Apparently, everything touristy closes early in England on a Saturday. It was the same problem we had run in to when I was looking in to going to Westminster Abbey during the layover. There was still tons of stuff to look at and do… Like the Thames river! Famous in lots of literature and where we were you could frequently see the Eton boys sculling. There is a large touristy shopping area there with cute shops and yummy looking food. We went to the King and the Castle Pub (I think that’s what it was called). It was a beautiful old building with real wood, broken stone, a tree in the middle of it’s patio and hanging flower baskets everywhere. Jon got his mandatory pint of Guiness and I had the deliciously cliched Fish n’ Chips! (Thanks Leanna and David!) 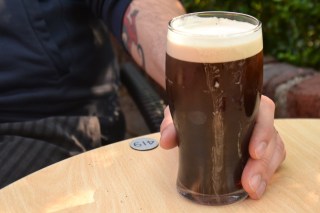 We got back to the airport with more than enough time to catch our flight and found a Gordon Ramsay restaurant!!! Gordon Ramsay Plane Food. Neither of us was hungry but this restaurant was a must! I was so excited. We decided to go for dessert and coffee. Jon had Gordon’s Chocolate Pecan Brownie with Vanilla Ice cream and I, of course, had his Lemon Creme Brulee. Do you like how I’m calling “G” by his first name now? We now have a relationship so it is okay to be so informal. Let me tell you… this dessert is definitely the highlight of our trip so far! I took more pictures of the food than of the Castle! The maitre’d saw me taking pictures and came over to make sure everything was okay. He was worried something was wrong with the food and I was a food critic or something and was going to write about it 🙂 I assured him we were just tourists who had crushes on Gordon Ramsay. Then when he found out we were from Vancouver he told us to take as many pictures as I like because he saw what angry Canadians can do over just a hockey game! He was quite funny actually.

No creme brulee will ever be the same for me.

Tea with my own personal honey pot!

A few hours later we flew out to Sofia. We were exhausted and did not get very much sleep the whole trip. I think in the 27 hours we were in transit, I slept maybe 3 hours and Jon only got 1 or 2. Thankfully, we had arranged for our hotel to pick us up at 4am and take us directly to our room. After quickly saying hi to Livi on Skype and taking a shower we tried to get some sleep.