October 23, 2011February 20, 2015
Today we got to join the Fraser Valley Down Syndrome Society at a family day at the Corn Maze! It wasn’t as nice of weather as we were hoping but we figured we could handle it. We strapped on our boots, rain jackets and got out our umbrella.
Livi was so excited to go in to the maze and could barely wait! We joined the first group and went in probably around 2:15pm. There were about 6 adults in our group and 8-10 kids. One mom with a baby in a sling. We figured it would just be a fun little game and we could let the kids decide which way to go… we were wrong. We got out of the maze around 3:45pm and Livi walked the whole way! I was so proud of her 🙂
We walked and walked and turned around and walked in the inch of mud that covered the ground. In the part 1 of the maze there are 8 posts with questions that you answer and it tells you which way to go. We made it to the 5th post relatively easily but circled back around to the 5th post at least 8 times! Livi kept saying “I REALLY want to get out of here!” We tried to make it a game and say that we were explorers who have to solve the mystery and follow the foot prints. She liked that at first, but then she tripped. I had her hand and caught her but her foot was in a puddle and it spilled over inside her boot. She started crying then but it wasn’t a meltdown thankfully. 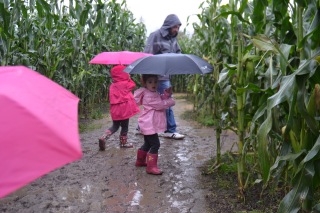 Sofie had thrown off her boots and lifted up the stroller rain cover to get her socks soaking wet! I took off her wet socks because I figured cold cotton was worse than bare feet. So I had one kid with bare feet and one kid with wet boots. Plus, Jon and my’s jacket were both just water resistant, not water proof. Awesome. 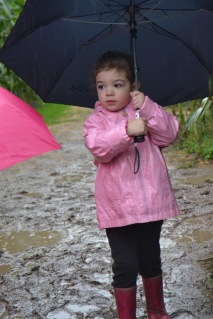 We tried another tactic with Livi to ward of the melt down… Some of the other kids were getting upset around this point too, so we talked about how she had to be brave for the babies. Yes, I’m sure we have already immensely screwed up our children but it worked! I reminded her how when Mommy is upset she gets upset too and the same thing was with the babies. If all the big kids got upset the babies would be upset too, so we had to be brave and help them find their way out too. She was SUCH a trooper. All the parents were totally frustrated and I felt so bad for the mom with the baby in the sling. She was trying so hard not too lose it.
Thankfully, some soaking wet teenagers happened by and rescued us! We tried out best to follow them since they would run ahead faster then us and double back if it was the wrong way. Our group did get split up but we hoped the rest were not too far behind. I was just so thankful to be out of there! We all were! 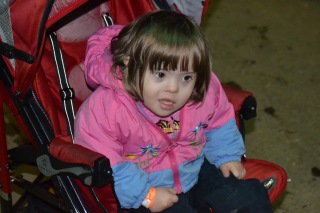 Once we were out Livi was much happier! We tried the water pump races, saw the animals, swam in the corn box, which was really cool by the way, and got a free pumpkin! We didn’t have any cash on us and the teller over heard us telling Livi she’d have to wait to get a pumpkin and they said we could get a small one because some one else had left a tip that would pay for it! Livi was very happy 🙂 Thanks Corn Maze! While Daddy was putting Sofie in the car and loading all the muddy gear up I let Livi go on the big trampoline pillow, which was more like a slip and slide. She did have some trouble getting up it and I wasn’t about to take my still try boots off to get her up. I even tried throwing her up but she just bounced back down 🙂 A dad who was already up there came and grabbed her hand to help pull her up. She really enjoyed coming down because the big kids were bouncing and she bounced on her butt all the way down 🙂
A very wet family day that had more frustration in it than we were expecting but it will definitely make for some good memories! We got home and promptly got the kids in a warm bath to hopefully keep any chill away. Then we had dinner with some hot chocolate to warm our insides! 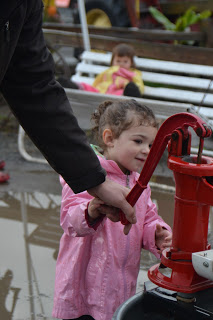 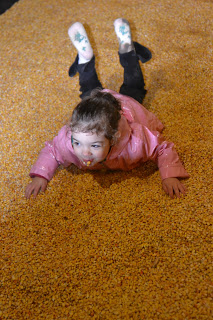 Swimming in, and apparently eating, the corn box! 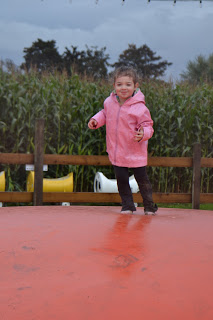 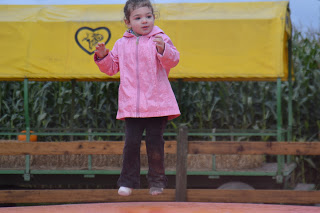 Check out how soaking wet her pants and socks are in this picture!
It was epic.

One thought on “The Corn Maze”