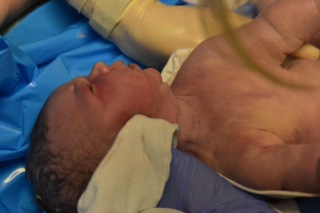 They did pull her over to the check up table quickly just because it had been such a quick delivery. My placenta was still inside. I asked if I could turn around and Jon reminded them that I wanted to hold her right away. They brought her back to my chest and I was in heaven! Jon was crying and coming down from all his stress and excitement.

Evie’s birth was NOTHING like we expected. It was far less painful and much shorter than we thought. Everyone missed it! Our midwife showed up to deliver the placenta. My sister showed up about 5 minutes too late and my mom and Livi had missed it by only 10 minutes. Jon’s mom came a little later and we never did text my photographer about being 6 cm 🙂 I feel a little disappointed for everyone missing it but I think the story is epic enough that they’ll get over it. My sister texted my mom who was just in the elevator at the time that they had all missed it. Everyone was in a bit of shock. Mom tried to tell Livi that maybe the baby was already born but Livi’s answer was “Maybe not, and there is going to be blood!” Sorry Livi!
Actually there was very minimal blood loss. The cleaning lady even asked if this was a C-section because the bed and bathroom were so clean, post birth and my rinse off. I had NO tearing. My midwife was amazed by this considering she came so quick in the end, was 10lbs 3oz, 22.5 cm long and had a head circumference of 27.5 cm! Jules, the midwife, said some would consider that sized head undeliverable. Not for these birthing hips! Too bad they won’t be delivering any more!
Evie (pronounce EH-vee) did have some pretty good swelling on her face and bruising on her head, face and shoulder but it went down pretty quickly. She looks a lot like Livi did… but still different and fatter 🙂 She came on her ultrasound due date and actually doesn’t look over done at all. That confuses me because I thought she was at least a week overdue!

Since everyone was on their way anyway, they all showed up right away to meet Evie. It was a busy maternity room with family and nurses trying to catch up on the paperwork. Evie went right to my breast and stayed there for nearly 3 hours! Awesome! This is a great sign for the breast feeding to come. She has slowed down a bit now and we are having to supplement with a bit of spoon fed formula because the bruising has turned in to biliruben and caused a little jaundice. Plus, my milk hasn’t come in yet and she needs more liquids in order to pee enough. She is rather large after all! I’m taking herbs to help with my milk supply already and since she is going to the breast so frequently we are expecting this to all rectify quickly. I am ravenously hungry too, to a higher degree than I was with Livi, so I know she is depleting me dry!

With her attached to my breast everyone had to wait their turn to hold her! Vanessa took pictures for us when she showed up so once I get those I’ll do a picture post 🙂 We did get about 6 pictures on our camera because Jon had the frame of mind to shoot a few just after Evie came out.

All our expected visitors had come and gone by noon so Jon and I decided to head for home after a short nap! I birthed her quick and was back in time for dinner! A bunch of people thought I should stay a night in the hospital but I figured I would sleep better in my own bed. I am a very quick recoverer post surgeries and births so I wasn’t worried. We had child care for the older girls. This was a great decision. I feel much more rested and comfortable than I would have been in the hospital. 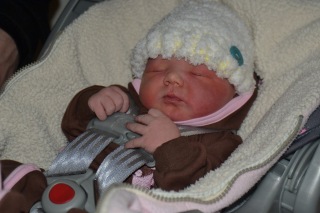 A midwife came to our house the next day and checked up on all of us and she is due again tomorrow, unless she is concerned about the jaundice and milk supply. We are all doing really well, despite me still having a horrid cough. Thankfully it is just a cough though. My sinuses are clear and energy level is up a bit. I’m back down to my pre-pregnancy weight! I only gained 13lbs and Evie was 10 of those pounds! My uterus went back down really quickly too. I’m surprised how contracted my stomach is already!

Livi is absolutely enthralled by her new baby sister. She dotes on her and narrates every little thing Evie does with a huge smile. It is pretty adorable. Sofie is… learning. She doesn’t care much for her sister yet but is trying to be gentle. She wants more attention from me, which was expected. I am trying to include her in cuddle time and give her lots of love too but it is a new balancing act. Jon is doing his best to keep the big girls occupied while being there for me. He slept on the couch last night to get a more solid sleep so he can be more energetic for Livi and Sofie during the day. My mom has also been an awesome help with Sofie especially!

Jon is back to work for 2.5 weeks starting on Thursday. My mom is around and Jon’s mom will come stay for a couple weeks to help out as well. Then Jon has a few months of parental leave! This will be so nice 🙂 I’m feeling very blessed and loving having a pink, estrogen filled household! Feel free to come for a visit soon. Maybe text me first to make sure we are totally up for it but I think we are doing pretty good!

There was an error retrieving images from Instagram. An attempt will be remade in a few minutes.