4 years ago we brought Sofie home. 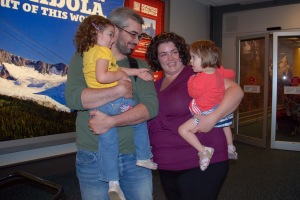 August 1st we met her in the orphanage and spent every morning and afternoon with her until August 4th when we took her out of the orphanage doors and she was ours forever! We had to spend 9 days waiting for paper work to come from the embassy and got home on August 14th after the most hellish 24hrs of travel we’ve ever experienced. Sofie only slept 2 hours of those 24 and not all in one chunk. She was hyper aware of everything and her little body could barely handle it.

Even though these 2 weeks ended in the best possible outcome for Sofie, a family, they were traumatic. She had never been outside the orphanage walls except once to go get her passport photo taken. Usually she wasn’t even out of her crib. Everything was new. Nothing was familiar. Everything was terrifying and too much to comprehend. She was in fight or flight mode and when she was overstimulated she would retreat into herself. It was heartbreaking to watch. She handled it all as best as she could but she had absolutely no tools to be able to process her new experiences and she was further traumatized, which added to the abuse and neglect she suffered from the orphanage.

Every year since August 20111, a switch seems to go off in Sofie on August 1 and her behaviours are magnified between August 1-14. It’s a fascinating and frustrating phenomenon. Her bad behaviour happens more often and worse. She hits and yells more. She seeks sensory input way more by touching everything she walks by. She can’t sit still. She throws things more. More impulsive. More tired. Less ability to make good choices. She is in fight or flight mode again. And the kicker… poop. She ALWAYS has a poop smearing incident, or nine, in these two weeks.

I have always just known it to be how trauma works. My sister would get sick every Christmas because Christmas growing up had more stress and fighting than peace and love. My husband would get grumpy, tired and irritable every year in the weeks leading up to the anniversary of his father’s death. I had never really looked in to the research behind it until a friend asked me for more of an explanation.

There is an actual name for it! It’s called the Anniversary Reaction or Anniversary Effect. HERE is an article Huffington Post circulated that does a decent job of explaining it.

“Anniversary reactions are considered the re-experience of a prior traumatic event — a death, a disaster or an individual tragedy. They are triggered by a specific date or event that strikes a chord deep inside our minds, which can be a traumatic portal to the past. A birthday, a notable date or a holiday can link to an earlier moment in our lives that was full of trouble, hurt or conflict. When they do occur, a person who may be highly functioning can be overcome and feel powerlessness, even immobilized.” – Mastering the Anniversary Reaction

I would push this Anniversary Reaction theory a little further and include the theory that our cells can actually hold memory… though I couldn’t find a good article to reference in my quick 5 minute search.

The Anniversary Reaction can improve. Over time we heal. Jon no longer is depressed for 2 weeks leading up to his father’s death anniversary. My sister no longer throws up at Christmas. Sofie’s “trauma week” (as I call these two week in August) are much more mild than they used to be.

These 14 days were once filled with countless poop smearing episodes, hitting, screaming, throwing, destroying, pulling hair, anxiety, silence from Sofie and crying from me. It’s not like that anymore.

This year, year 4, is better, but still bad. Sofie being unable to sit still or handle too much stimulation for the first 4 days. She was extra tired at the end of each day and would touch and hit everything for sensory input, not to hurt people. She did trash my mom’s house the first day but didn’t actually destroy too much. After day 4 she calmed down. We only noticed extra rocking (the ‘orphan stim’ rock she occasionally does) and teeth grinding. I thought I was in the clear this year! I thought we had healed enough to bypass any poop incident!

Unfortunately I thought wrong…. We are on the last day of “trauma week” and woke up to the pungent smell of poop. It was epic. I should have known that a final climax might be in the works. Our last 24hrs 4 years ago was trauma for us all, but especially Sofie. It was the climax back then and it is again this year.

Sofie is healing. I hate what being an orphan did to her. I hate what she had to go through. If I sit and think about it too much I get so angry and sad. Thankfully, each year gets a little bit better. We have a mantra each day that I go through with her in ‘trauma week’. I tell her that she is safe and then we go through all the people who love her, and she is SO LOVED! I think it helps.

4 years ago we started the most amazing journey. I can’t imagine our lives without her. I would be quite bored I think. Her Anniversary Reaction is completely worth it for all the smiles, dancing, hugs, hair playing, joy, and love we receive the rest of the year.

Cuddling on the couch a few days ago Livi gave Sofie a big hug and said “I would definitely not be this happy without Sofie.” Queue my heart melting…. until she followed it up with “who would I watch movies with?”