We have finished our move and are trying to settle in to our new home. The move went really well, even in the 35 degree heat! Our friends and family who helped were amazing! We were all packed up in to the truck in 2 hours and it only took half an hour to unload. They stayed and helped set up our beds, a bookshelf I had bought from Ikea and unpack most of my kitchen! Thank you so much everyone!!!

All our boxes are unpacked and I finished putting up the last of the pictures today 🙂 The pictures have really helped me to feel more settled. I still have a bit of a unsettled feeling being here but I am pushing through it! There are so many things I love about being here. The yard is fabulous! After Livi gets her bottle in the morning, she asks to go outside 🙂 We have eaten nearly every meal outside too 🙂 I love the colors of the walls. (Thanks everyone who helped paint before we moved in!) I love how quiet it is! No cars and sirens to lull us to sleep. I love being able to go for a walk with Livi and not have to be constantly on guard for traffic. I love being close to my Mom and Maggy and having them so involved in Livi’s life. I was able to help my Mom out yesterday by being home for her charges too when she was going to be late. It is a mutually beneficial arrangement!

I can’t shake the weirdness of the situation though. I had moved out of this house at 17 and ten years later I’m back? Livi is sleeping in the same room I had as a teenager! The house has been completely renovated since I lived here last. There was never a basement suite when I was here, but it still is difficult telling people I’ve moved in to my Mother’s basement suite. We went for a walk today and I had all these memories of the neighborhood and various houses where friends used to live. I wasn’t the most well behaved teenager, so not all those memories were positive. I know that it was the right decision to move here and I even feel that it was a good decision, but I also know it is a sacrifice for Jon and I to not own our own home anymore, or to have a proper sized kitchen (there is no storage in our kitchen) and to live in such close proximity to my fabulously amazing and dysfunctional family!

Please don’t think that I am ungrateful for this opportunity. We are truly blessed to be able to live so well while saving money for our adoption. We are paying some rent, just not a lot 🙂 We also have the added blessing of my Mom’s support/babysitting upstairs! This is going to be invaluable when we bring our next daughter home! I know it is a sacrifice on my Mom’s part too. It is her contribution to our adoption. I’m sure many of her friends think she is crazy to have allowed such a scheme.

In major life changes I generally experience a bit of a psychological episode which I think I am mostly keeping at bay right now. In the past, I’ve become depressed, moody, anxious, unable to sleep and overly controlling etc… So far, I’ve been coping quite well… I think. I have an uneasy feeling, which I am contributing to this place not feeling like home yet. With the lack of storage in the kitchen and bathroom, I’ve had to “artistically” display many items I’d rather have hidden in a cupboard. It looks a little chaotic to me and will take some getting used to. I’ve also been having some CRAZY dreams too. I regularly have wild dream and intense nightmares but since we’ve moved my nights are filled with crazy, non-intelligible dreams. If this is as bad as I get, I’ll be happy!

Olivia has been having a bit of a tough time with the move. For the first couple days, when she would get upset, she would ask to go home. It broke my heart. She has been very clingy for me in particular and she’s had some pretty epic meltdowns. I must admit that I have allowed her to watch more cartoons this week than she has watched all year! I needed the break and she needed some quiet time 🙂 She is loving the yard and the little pool we got her but she has also had a few very sad moments. Aside from her melt downs she took her first tumble out of her crib. I think she basically hit the ground face first too. She was bleeding from her nose and lip, has a big bruise on her forehead and rug burn under her nose. It was very sad 😦 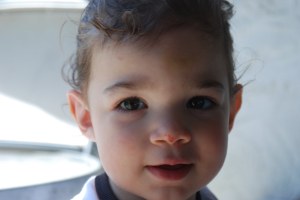 All in all, we are settling in as we expected. We are hoping it feels like home sooner than later. Our condo still hasn’t sold, but I’m trying not to think about it. Nothing comparable is selling right now so we are starting to think of how much of a hit we are willing to take. There are so many unknowns with real estate! We need it to sell yesterday!

One thought on “It Is Finished”

There was an error retrieving images from Instagram. An attempt will be remade in a few minutes.